Once again, the Anderson Brickler Gallery, in collaboration with the Riley House Museum, is at the forefront of introducing Tallahassee to history lessons that might have been missed along the way.

Combining art and literature and an historical backstory that touches both African-American life as well as the broader scope of the American-experience, the Anderson Brickler Gallery presents God’s Trombones: Seven Negro Sermons in Verse, as part of its Floridians in the Harlem Renaissance exhibition and the Riley’s Virtual Harlem show. Featured through May 13, Anderson Brickler will present an illustrated volume of “poetic sermons” by one of the stars of the Harlem Renaissance, James Weldon Johnson.

But first, a moment. What was the Harlem Renaissance?

Following the Civil War in 1865 and Reconstruction, African Americans began to take their place in politics and other civic and economic activities. By 1875, they held numerous public offices throughout the South. But a backlash soon began. The rise of the Ku Klux Klan and the passing of onerous “Jim Crow” laws starting in the 1890s disenfranchised and disempowered Southern African Americans. 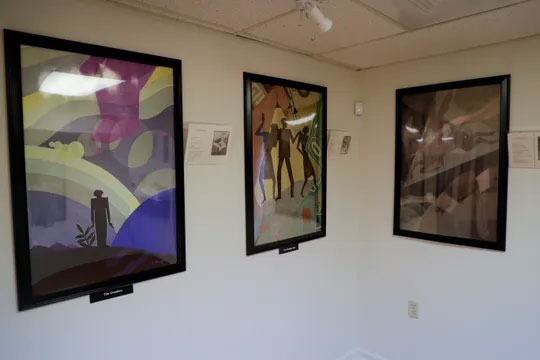 Unable to live under ever more oppressive conditions, the Great Migration began. Heading North to the Midwest and Northeast, thousands of African Americans relocated to states where their enterprise and intellect could flourish. And thus was born in New York City a cultural movement known as the Harlem Renaissance.

Painters, writers, actors, dancers, and musicians began to produce works that would influence the rest of American culture for generations to come. And James Weldon Johnson and his illustrator, Aaron Douglas were at the forefront.

James Weldon Johnson was a Renaissance Man in any sense. Well-educated, he became a lawyer first, then a Broadway songwriter, then a diplomat serving the United States in Venezuela, a novelist, an important officer in the NAACP, and finally, a professor at Fisk University. One of his most influential works was a collection called, God’s Trombones, Seven Negro Sermons in Verse. 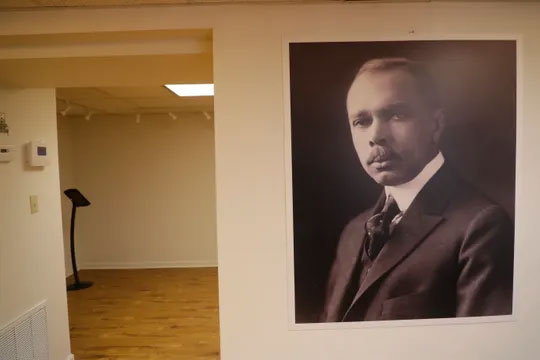 In the 1927 work, Johnson calls on his own memories of black preachers, their cadence, their passion, their ability to articulate emotionally the message of the sacred texts. Written not in dialect, which at the time was a subject of comical derision, but in simple language that goes directly to the heart, Johnson’s allusion to “trombones” is an homage to those preachers whose booming voices could modulate to lullabies, but whose verbal musicality could move a congregation to tears.

To illustrate the sermon/poems, The Creation, The Prodigal Son, Go Down Death, Noah Built the Ark, The Crucifixion, Let My People Go, and The Judgment Day, another Harlem Renaissance giant was chosen, Aaron Douglas.

Douglas was an illustrator and muralist whose large works hang in the New York City Library and at Fisk University where he founded the Art Department. Influenced by the Art Deco and Art Nouveau movements as well as African and Egyptian silhouettes, Douglas was in demand for the contemporary style in which he rendered African American figures. 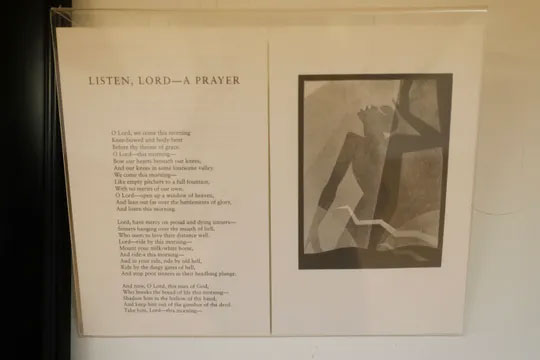 The collaboration between Weldon Johnson and Douglas resulted in the modernistic prints for God’s Trombone’s that combine geometrical circles in soft shadows, stronger “beams” of light, forest and city locales, and African or African American figures who are variously joyous, industrious, as well as exploited. Rendered in softly muted tones that fade into shadow and mist, or layered again and again to form large groups, Douglas approaches the illustrations as he might a mural, monumentally conceived, yet exquisitely detailed.

It is these pieces of art that give God’s Trombones, Seven Negro Sermons in Verse much of its power, and which provide an intimate look at the creativity born of suffering that was the Harlem Renaissance.

The graphics, as well as the poems, are on display at the Anderson Brickler Gallery through May 13 at 1705 S. Adams St. Wednesdays 11 a.m.-3 p.m. and Saturday 2-5 p.m.. To schedule gallery visits and group tours: andersonbricklergallery@mail.com