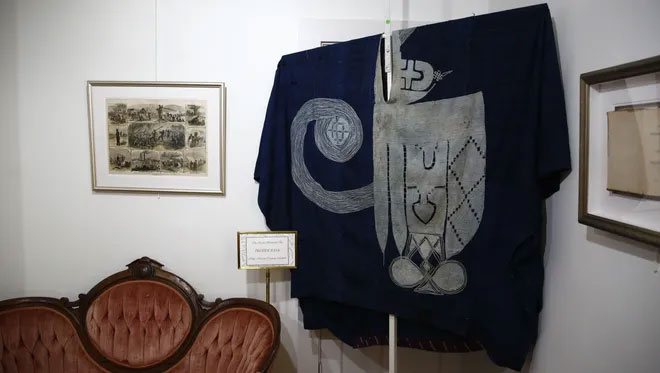 Did you ever walk through the woods and out of curiosity pull back the bark of an old fallen tree? You may have thought you knew everything you wanted to know about the crusty, forgotten bark, but what lies beneath that surface — busy ants, ancient knowledge passed along pheromone-laced trails, an entire culture on display — reveals a vibrant universe which most never see.

The analogy is apt here. Because with an opening reception Saturday, June 23, at the Riley House and the Anderson-Brickler Gallery, Willis Hakim Jones’ vast collection of African-American artifacts and photographs of the Gullah GeeChee culture will pull back the “bark” on a portion of American history that most don’t know.

With 124 separate items stretching from the 1860s to the 1960s, the collection catalog includes artifacts from Senegal, Timbuktu, Nigeria, and Mali as well as the American South. The picture it draws is not only of the vast enslaved diaspora from Africa, but particularly, the ways in which the various cultural practices from the enslaved’s homelands were incorporated and preserved in the new land to which they were brought. 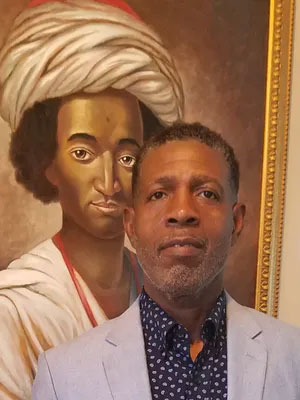 Willis Hakim Jones is photographed here in front of a painting of an 18th century African American Muslim. His collection of documents and artifacts from the Gullah GeeChee culture of South Carolina is opening Saturday at the Riley House Museum and the Anderson-Brickler Gallery. Provided by Willis Hakim Jones

But while many know something about plantation life and conditions in the 17th and 18th centuries, fewer know about the Gullah GeeChee culture that existed in the Low Country of South Carolina and its barrier islands. It was to this hot, wet, agriculture section of the South that West African individuals specially chosen for their ancestral knowledge of rice-growing and what was thought to be a natural resistance to the malaria and yellow fever that often raged along the American coast, were selected for abduction and sale as slaves.

Tossed into a cross-cultural melting pot of numerous African country’s religions and practices, the enslaved people synthesized their own culture. Preserving much of what was familiar from their homelands, but adding in some things that were new, a novel language developed—a kind of creole called Gullah GeeChee, which blended African words with 18th century English. It is still spoken today.

The Ogeechee River that runs near Savannah may have been the root of the word GeeChee and Gullah may have come from distortion of the word, “Angola” from where many of the enslaved were born.

But for a true understanding of the collection’s meaning and importance, it is necessary to ask the collection’s owner, the man who with his encyclopedic grasp of history, has for years devoted his life to the sleuthing-out of these artifacts. Willis Hakim Jones seemed an unlikely “Indiana Jones” in the beginning.

Born into a working-class family in Savannah 65 years ago, he went to college for a couple of years before beginning work in a South Carolina paper mill. There was little to suggest that one day he would hob-nob with professors who somewhat jealously examine his collections or that a Smithsonian curator would treat him as a peer.

But perhaps a seed had been planted early. Jones recalls that for a show-and-tell in the 7th grade he had taken a yellowed copy of an old newspaper his grandmother had given him about African American reaction to an earthquake. But the teacher “borrowed” the paper and never gave it back. Jones had a hint that it might have been valuable… or that the teacher wanted to get rid of it. 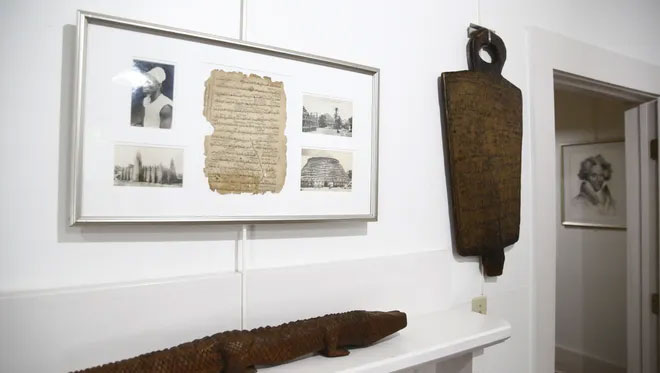 Much later, he began antique-store and garage-sale-hunting with a white friend who would buy and sell old items to finance his gun collection purchases. But Jones got hooked on the historical significance of what he was seeing. He began to read books; to talk to experts on various aspects of African American life; to train himself to be an expert in authentication of what he was seeing. With the passionate enthusiasm of a “true believer,” Jones has single-handedly created collections that tell stories that likely would have been forgotten.

He has sold a part of what he had amassed to the Seabrook Museum on Seabrook Island, and now is sought out by museums hoping to display his other collections of African American musical artifacts and Islamic influences. Which brings us to the Gullah GeeChee works on display at Riley House and the Anderson-Brickler Gallery. Pottery, carved walking sticks, quilts, musical instruments and hand-written letters in Arabic all describe a vibrant culture that blossomed almost “untouched” when the white overseers left alone the workers in the low-country’s disease infested fields. 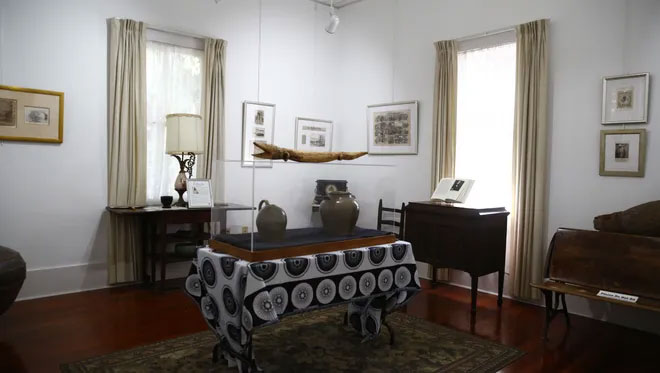 “Often people do not know that many of the people brought from West Africa were Muslim,” says Jones. “Islam had been in Africa for centuries. Laws governing treatment of women, of property, and of course, of religious practices were in place,” he says. “Frequently, the people brought to work the rice fields were literate. In fact, one man, Omar ibn Said, wrote a memoir in Arabic… that later sold for $500,000 to the Smithsonian.”

There are several letters and numerous photographs that track Islam’s roots to the culture that developed in the Gullah GeeChee peoples. “Some old people remembered their grandparents or great-grandparents never consuming alcohol or pork or praying to the East each day. They may not have known why, but we can trace it back,” he says.

And there were other beliefs that came — and blended-in as well. Ancient animistic and spirit religions with their “face jugs, that may have been used by “root workers,” those practitioners who could remove “hexes,” offer totemic protection, or heal maladies. Jones’ collection touches on many of these practices that are poorly known, but he believes, the knowledge of which must be preserved.

George Orwell once said that, “the most effective way to destroy a people is to deny and obliterate their own understanding of their history.” Willis Hakim Jones is dedicated to expanding, deepening and preserving that understanding.

Althemese Barnes is the Director of Riley House and the founder of the Florida African American Heritage Preservation Network, a coalition of over 60 museums and historical sites dedicated to maintaining and honoring African American culture in the U.S. It is through her connections with member museums in St. Augustine and Jacksonville where the Jones’ collection had previously been on display that it now comes to Tallahassee.

What: “Making Do,” Collection of Gullah GeeChee Artifacts from the Willis Hakim Jones Collection.

When: Reception: 1-2 p.m. Saturday, June 23, and viewing 2-5 p.m. (transportation between the two sponsoring museums will be provided.) On display: June 23 through Nov. 20