post-title ‘On top of the world’: Candace Allen’s exuberance on display in ‘A Dream in Color’ https://andersonbricklergallery.com/wp-content/uploads/CandiiKismet_exhibit5.jpg 2022-02-26 22:16:05 yes no Posted by ABG Categories: Latest News 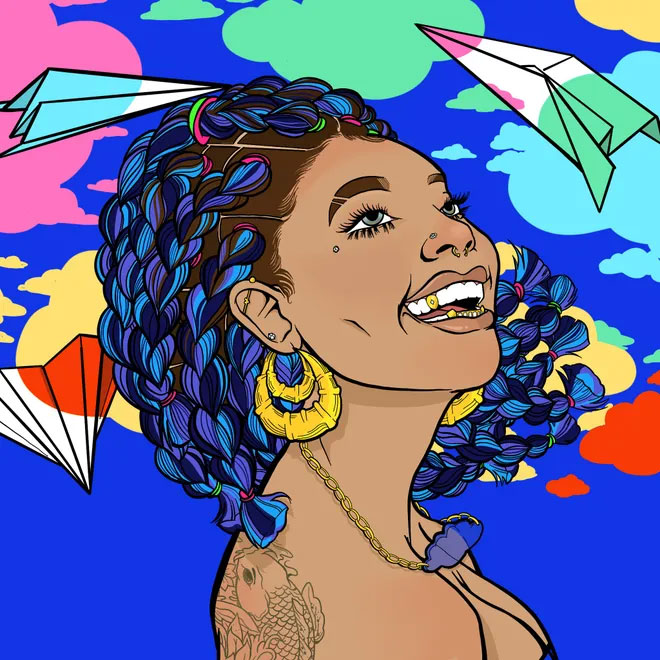 Eyes heavenward, the young woman at the center of Candace Allen’s “We Go High” piece stands six feet tall. Her box braids, carefully woven in dark navy and periwinkle, are windswept. She laughs at a sky buzzing with paper airplanes that cut through technicolor clouds.

“It’s hyperbolic in the best kind of sense,” notes Allen.

Her digital portrait is a centerpiece of her show “CandiiKismet: A Dream in Color” at the Anderson Brickler Gallery, on display now through May 14. Allen is the first and youngest female artist to have a solo show at the gallery.

“We Go High” is surrounded by mobiles of paper airplanes, which Allen hopes will immerse viewers into these colorful landscapes. Her illustrations have been called magical realism, but Allen grounds her images in both fantastical and tangible worlds.

“It’s real because you know this girl, she’s your best friend’s older sister who you always thought was cool or your substitute teacher or someone who works at your dentist office,” says Allen. “She’s tall and feels good about herself. She’s important and has her own agency and voice. She’s on top of the world. These paper planes are racing past and piercing these clouds around her, and as they do, they’re colored themselves. That’s a feeling. That’s a moment.” 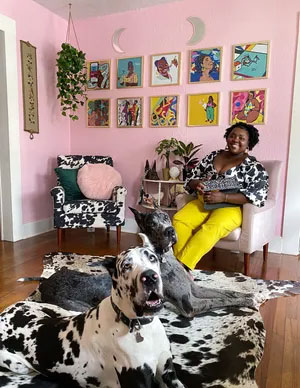 Candance Allen has a show “CandiiKismet: A Dream in Color,” at the Anderson Brickler Gallery, on display now through May 14.

Allen earned her degree in fine art with a focus in illustration and printmaking from Florida A&M University.

While in school, she appreciated the push she received from professors like Dr. Pamela Kabuya Bowens-Saffo. A longtime lover of literature, Allen was energized by connections she made between printmaking and books. The pop art movement served as another source of inspiration, with its repeating colors and patterns.

A native of Quincy, Allen grew up constantly drawing characters. Her favorite subject is Black women. Allen constructs amalgamations that borrow bits and pieces from the faces, bodies, and stances she sees in her community to create completely original works. Allen strives to capture the everyday through her unique lens.

She appreciates artists like Norman Rockwell whose artistic approach elevated the everyday lives of people in his paintings. The subjects that Allen creates come from her own everyday encounters. 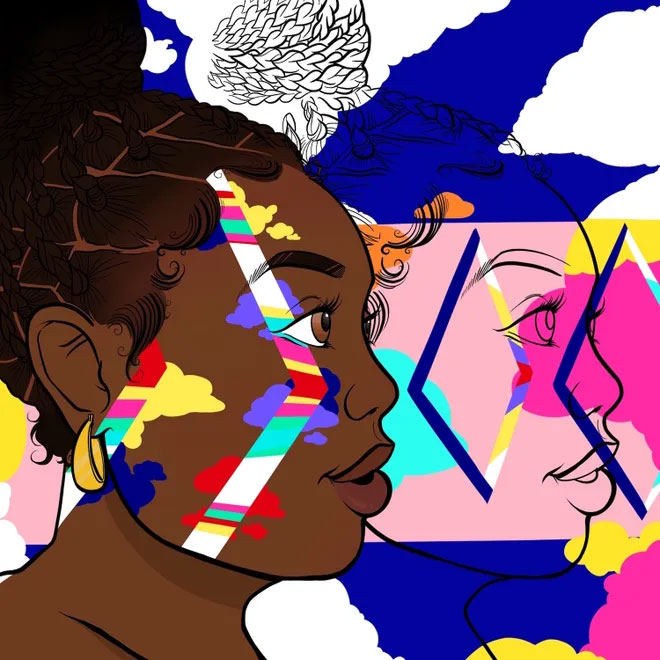 Candance Allen has a show “CandiiKismet: A Dream in Color,” at the Anderson Brickler Gallery, on display now through May 14.

The most beautiful people’

“I’m always looking at Black women and Black people because I think we’re the most diverse group of people in the world given the nature of our diaspora,” says Allen. “When I’m creating, I take from every person I’ve seen. It’s the barista’s eyes and the nurse’s lips and the mail lady’s hair. I look at the shape of their nostrils, the way they have this beauty gap that no doubt comes from West Africa. I think African Americans are the most beautiful people in the world.”

When Allen sits down to capture a person, she considers not only what they’re doing, but how they feel about what they’re doing. While digital art can be intimidating given the multitude of computer programs available, Allen confesses that she only uses four of the brush tools on her computer to create her work, emphasizing the importance of simplicity and finding creative approaches that fit the artist.

Ideas for drawings come from fleeting thoughts or moments in her day. Allen recently finished a drawing that came to her after seeing a nature documentary on flamingos.

The show reminded her that flamingos are pink because of the food they eat, which made her wonder what would happen if they were fed something different. A few hours later, she had drawn a little girl feeding a flock of flamingos Rubik’s cubes as their feathers transform into multi-colored checkerboards.

“That’s the childlike nature in what I do,” laughs Allen.

Beyond whimsy, Allen’s artistic contributions center on, and celebrate, Black women in hopes of promoting more widespread representation in the media. Included in the show are some of Allen’s medical illustrations that she creates for Beloved Birth Black Centering, a birth justice center in California. The organization is run by all Black midwives, doctors, and nurses, and the facility commissioned Allen to create artwork for their programming.

Allen has created art for instructions on everything from swaddling a baby to mixing formula to best labor practices. These illustrations live side-by-side in Allen’s exhibit, which she hopes will not only inspire, but emotionally touch the gallery patrons who see the work in person.

“I think the most rewarding thing is that people get to see themselves in my work,” says Allen. “The closer you get to my work, the more you realize it is you. I think it’s exciting, not just for young people, but it’s important and validating for me too.”

Amanda Sieradzki is the feature writer for the Council on Culture & Arts. COCA is the capital area’s umbrella agency for arts and culture (www.tallahasseearts.org).