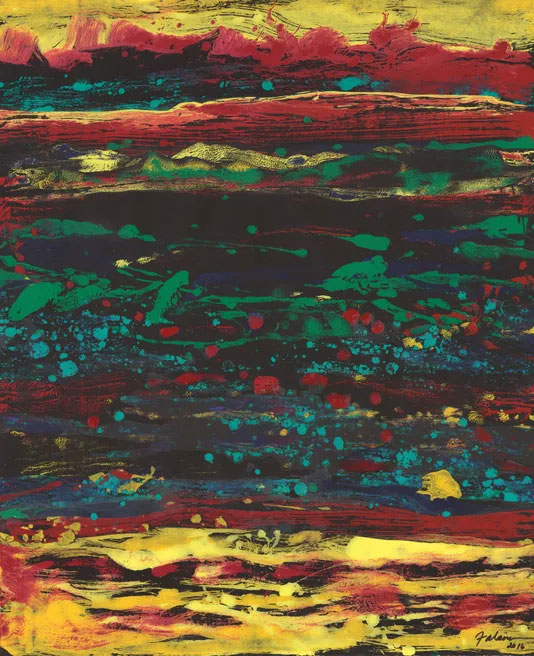 As Kenneth Falana gears up for his retrospective exhibition “Six Decades” at the Anderson Brickler Gallery, he reflects back on his childhood passion for art.

A young Falana gazed in wonder at the massive paintings and sculptures adorning the Ringling Museum of Art near his home in St. Petersburg, Florida. The now-internationally recognized printmaker and collage artist was inspired to begin drawing by these masterworks.

Growing up during segregation, art instruction was not available in Falana’s primary school education. Once he graduated from high school, he attended a community college that also lacked an art program.

He chose to study his second love, biology. Working on a farm to help support his family, Falana was familiar with the growth and flowering of plants and his fascination with landscapes and botany placed him at the top of his class. In his junior year however, Falana transferred to Florida A&M University to study art education and never looked back.

“When I switched from biology to art, those professors opened up a window for me and what I wanted to do,” says Falana. “Before I always looked into the building through the window, but with them I learned how to step through the door and begin creating what I felt inside.” 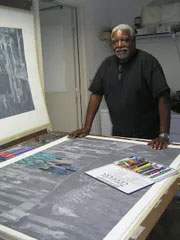 Kenneth Falana earned Professor Emeritus status in printmaking at FAMU before retiring in 2011.

The decision led Falana to his decades-long career as a scholar, artist and professor. With an MFA from University of Wisconsin-Madison, he earned Professor Emeritus status in printmaking at FAMU before retiring in 2011. Though that was seven years ago, Falana continues to produce new works, not feeling one bit of his 78 years.

“I’m up at three and four o’clock in the morning working,” says Falana. “I can’t stop. It’s almost like something is driving me now to work on more than one piece at a time.”

Always voracious for new information, Falana’s studies in modern art, abstract expressionism and surrealism are all present in his printmaking and silkscreen techniques. His love for investigation has led him to innovate his own technique, silkscreen construction collage. The process involves painting color inks on large sheets of paper, then cutting and juxtaposing them together to create large-scale abstractions.

He discovered this process by happy accident one night after silkscreening 20 prints that he found unsatisfactory. Taking his scissors, Falana cut up the prints and found interesting patterns emerging in the foreground as he rearranged the pieces. In his early work he would use found images to collage, but now makes his own color gradations and materials for each piece. 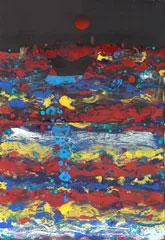 “I love experimenting with the technique, the medium, the material,” says Falana. “I’m now using monotypes where you only get one print, but I continue to pull images from it as the ink dries. It creates all these wonderful textures and forms and I’m taking those, cutting them and reassembling them.”

In pulling prints for one of his current works, Falana revealed what he interpreted as a woman’s face. Past images have reflected on his time marching, demonstrating and observing the civil rights movement. The sense of exhilaration and emotions Falana felt during this time period is mirrored in the bright, vivid hues he tends to utilize, which he says are present underneath the more monochromatic political images.

The majority of his early works also developed out of lessons he set for his students. He would present them with a visual problem, let them work on it, lead critiques and then show them the piece he created to solve it.

One problem involved using one color, two complementary colors, spirals and diagonals and resulted in his work, “You and I.” Another, “Red Field,” can be seen in the Six Decades exhibition. 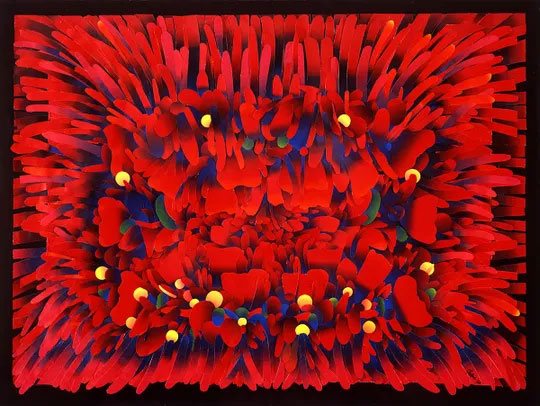 The idea for Ken Falana’s “Red Field” came from an article on the Great Barrier Reef.

“I happened to be looking through a National Geographic magazine and there was this article on the Great Barrier Reef with this huge clam,” recalls Falana of the creation of “Red Field.” “Its mouth was wide open with all these beautiful, iridescent colors. I kept thinking about the design and composition of the clam I had seen and used it to answer the problem I had given my students.”

After six decades of learning, trial and error and joyful experimentation, Falana says he feels a true freedom in his art making. He likens himself to a giant sponge that has absorbed a diverse array of history and color and is continually transforming the output into something uniquely his own. Whether the work deals in the past or present, he is always in conversation with the times. 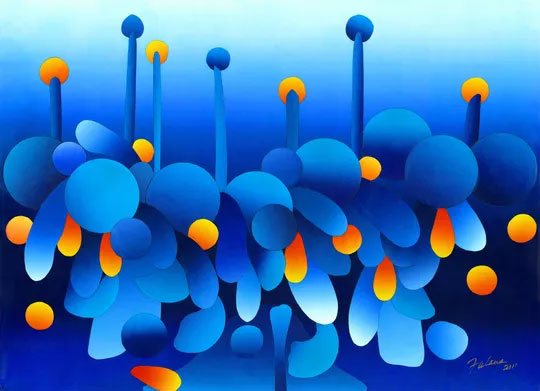 Currently, he’s working to reconcile his feelings towards the environment and global warming. He’s concerned about the overuse of fossil fuels and presence of toxic dumps, which appears as metallic greens, reds, blues and yellows in his prints. Blending and mixing these colors together creates new, intense hues that reflect his thoughts surrounding climate change.

For the Six Decades exhibition visitors to the Anderson Brickler Gallery will witness how these newer pieces hang alongside Falana’s earlier constructions. While ultimately he sees art as dealing directly with the human condition, he is forever eager to see what new images come forward through the ink.

“Each time I look at a piece, its energy pulls me in and I see new things occurring and new stories,” says Falana. “I want the viewer to allow the energy and movement of the piece to pull them in and make that story a piece of their story, too.”