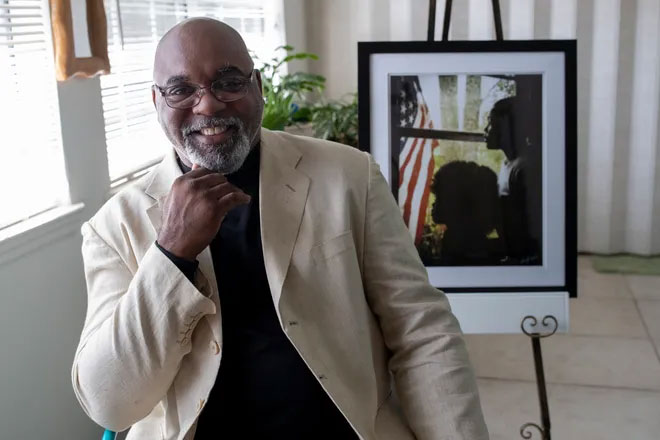 Stanley Johnson, a local photographer, will have an exhibit titled “Walls” at the Anderson Brickler Gallery starting Friday, October 30, 2020.

In the Anderson Bricker Gallery’s new exhibition of photography opening Oct. 30, Stan Johnson illuminates what so many African Americans have felt for generations. Titled simply, “Walls,” Johnson’s poignant images for the first time find the photographic artist speaking about his own life, and the barriers, be they brick or bias, that people “like him” face every day.

Johnson was born in Quincy, an athletic boy who would later put his football talent to use in his home town. His mother was a teacher, and father a maintenance man who had an affinity for the camera.

“My dad had been in the military and acquired a German Kodak Retina 1A camera there that he used for taking family photos.” At the time, Johnson’s interests leaned more toward elaborate “doodling” and a fascination with bugs, but like his father, he had begun to “play around” with that well-used camera.

Entering FAMU, Johnson wavered between entomology and engineering. But like many others before him, neither major proved a perfect fit. What had begun to blossom however, was an artistic sensibility inspired by an art-majoring fraternity brother.

“I began to paint in acrylics. Later I took up air brush work. I developed proficiency in screen printing,” Johnson said, all culminating, while still a student, in his becoming the senior graphic artist at a custom T-shirt company. 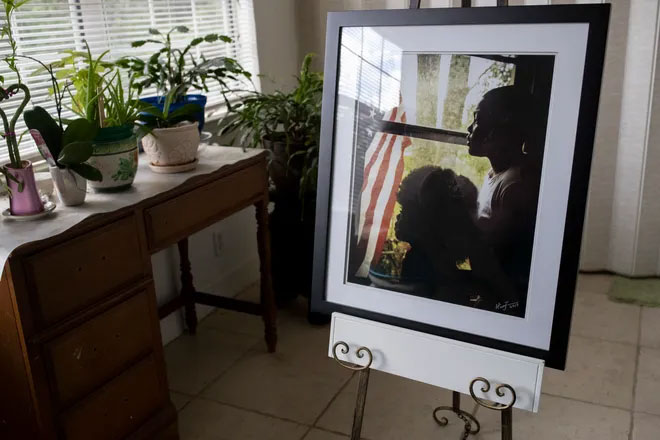 An award-winning photograph by Stanley Johnson titled “What Future?” is part of his exhibit “Walls” which will be at the Anderson Brickler Gallery starting Friday, October 30, 2020.

But Johnson says he realized he would not graduate college in four years, and he was eager to get on with his life. Almost surprising himself, he enlisted in the Marines, where he would spend the next three years traveling the world…and acquiring a good camera for himself — an AE1 Canon. Yet it would not be used professionally for years to come.

After the Marines, Johnson worked in state and county government jobs, started his own successful screen-print T-shirt company, and returned to FAMU to earn a degree in Graphic Communications, eventually using it doing graphics for the Gadsden City Times, and for the Department of Children and Families. It was from that springboard, that his artistic life truly grew.

“DCF asked me if I could create a brochure and video about foster children and their families. They also wanted still photographs of eight or 10 of the children. When they came back…,” he says with incredulity, “They were really pretty good. These are nice!” And so, in 2005 Johnson began a kind of “college course” in photographic self-teaching.

He was excited like he had never been in school. He read everything he could on photography, and laid down his old AE1 Canon to buy a new Canon EOS R digital camera, which he admits, appealed to his need for “immediate gratification.” 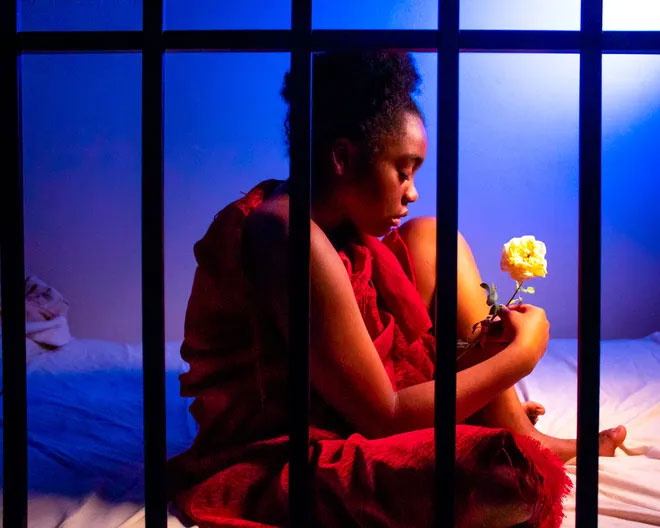 Soon, Johnson was documenting weddings and anniversaries, creating portraits in his own studio, and tending to the new company he had started, Stan Johnson PhotoGraphics (SJPG.) And yet, as the years went on, he says he was feeling a little burned out with the routine assignments.

“I needed a new vision. I guess I needed some new inspiration from professionals who were not self-taught like I was.” In 2018, Johnson decided to get a Masters in Photography from the Academy of Art at the University of San Francisco. 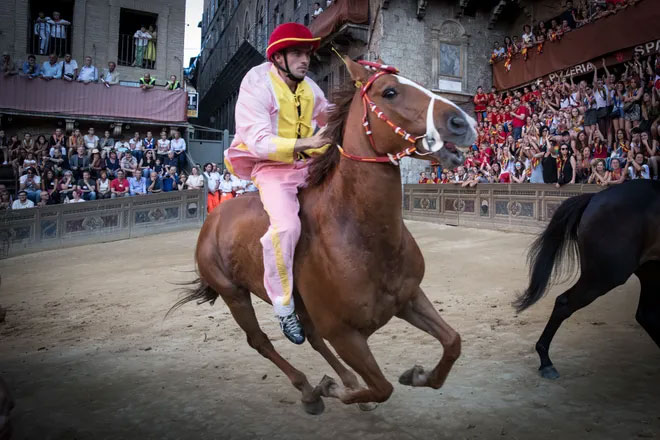 Italy Palio Di Siena, one of the images Stan Johnson shot while studying in Italy.

The directional turn from that period is clear. The resulting images from three months’ study-abroad in Italy show color-flooded landscapes, lonely people in the midst of crowds, stunning close-ups of horses at the famed Palio in Sienna. But there is also a shift in the artist’s motives.

“One of the professors told me that my photos were great, but that he didn’t see “me” there. He pushed me to put myself into the work,” says Johnson. And so began the emergence of Johnson’s own truth into the photographer’s work. An African American man making a statement about living today in America.

What will hang in the Anderson Brickler Gallery beginning Oct. 30 and running through Dec. 30 is what Stan Johnson calls his “Master’s Thesis.” “In the past, I had always photographed as if I were trying to not offend. These images represent what I feel.”

Titled, “Walls,” the exhibition will show 16 photographs depicting the barriers to a full and empowered life experienced by African Americans and other minorities in the United States today. Though a wrenching topic, the photographs are beautiful, their compositions painterly, their messages delivered without bitterness, but with a sadness that perhaps may move another human soul toward change. 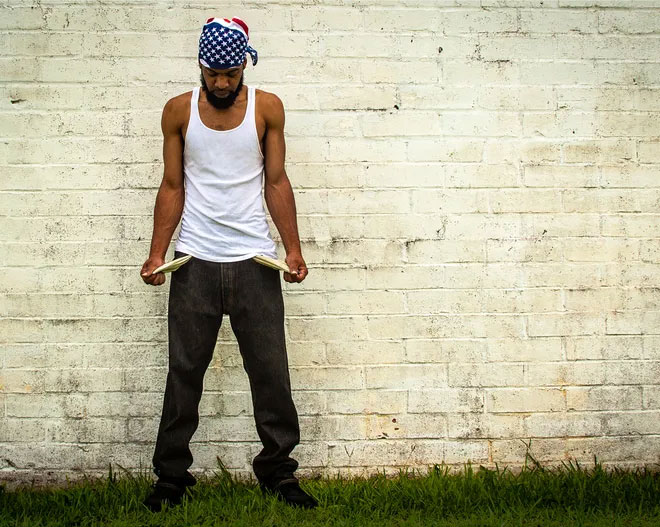 A young black man against a white brick wall whose “Empty Pockets” depict not only poverty, but the opportunities that are lacking in his life. The photo of a young woman seated behind bars as she holds a withering flower, which Johnson says speaks to the loss of true liberty felt by African Americans and minorities.

A photograph of two black youngsters gazing at the American flag from behind a pane of glass, a barrier that though invisible, keeps them from true participation in the American dream. These and other photographs, Stan Johnson says, confront the disparities he has felt in this land of liberty.

Johnson, who was born into a segregated South, delivered by a black midwife into a black household, attending an all-black school in an all-black community knows that his opportunities were limited. He remembers two years of what he calls, “true integration” and the friendship of a peer who was white, only to have the friendship extinguished when the “private white school was built.”

Stan Johnson, along with Cynthia Rose, a poet, he has published the E-book, “Beautiful Grace,” filled with his photographs and verses of the Bible.

Johnson recalls the looks of disgust from white adults to the dark-skinned grade school boy and the verbal abuses he heard yelled at grown-ups he loved.

In his images at the Anderson Brickler Gallery, Stan Johnson means to challenge and mentally provoke the viewer with a hope that the inequality born from what feels like an uncaring society will be altered.

But in the man himself there seems little bitterness or anger.

Instead, along with Cynthia Rose, a poet, he has published the E-book, “Beautiful Grace,” filled with his photographs and verses of the Bible, and a forthcoming volume of poetry and photography, called “Journey of Light.”

From a man who has grown from technician to an artist willing to expose his innermost feelings, the new exhibition of photographs is a journey many will want to take.